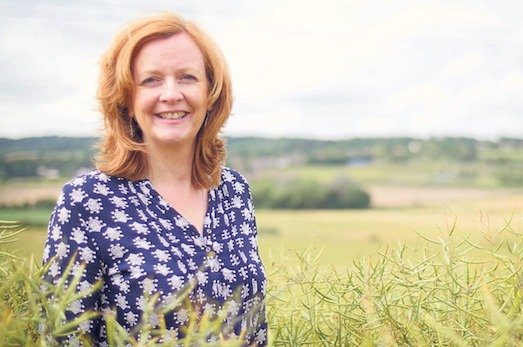 What do housing estate builders and pioneer community workers have in common…? Well, after chatting with Sue Steer – who’s been in post at Lubbesthorpe, Leicester, since September 2016 – it seems that the answer may be ‘more than you’d think’. Groundworks have been ongoing to prepare for the new housing development for over a year, and the deeper preparation of being ready to welcome and support the formation of community as people finally move in has run alongside the muddy stuff.

“People do ask me, “what are you doing? There’s no people yet!” And I have wondered the same myself at points…!” says Sue, whose pioneer community role is supported by four denominations and will eventually mean that she moves to live in the heart of the new community of Lubbesthorpe. However, with the first settlers due to move into the first completed houses by the end of April, all the preparation and relationship building is about to reveal its value. “The last six months have been about working with stakeholders and key partners at the Council”, Sue explains. “We’re starting from scratch here, and Churches Together in Leicester have been building solid foundations for the work we’re hoping to do as people begin to move onto the estate.”

Those in the housing development know (nope, us neither) will be aware that a “106 Agreement” can provide a legally binding framework to guarantee the provision of certain community facilities as a new estate is built. In Lubbesthorpe that will mean that within the first year or so spaces such as a community cabin, and later house, will be provided to give a focal point for gathering and resources. However, what in the interim? The first residents won’t even have completed roads or pathways – so how does Sue plan to begin to foster a sense of community when everyone needs to hop in their car just to leave the estate?

“I’m thinking about what will bring people together,” says Sue. Initially, as only eight households per month are expected to move in per month as the estate is completed, this will involve personal visits and welcomes to every home – as well as some out-door events planned over the summer to provide spaces where the new neighbours can meet each other. However, Sue recognises that this work will soon become unsustainable, and so she is currently building a team to help her plan and eventually deliver the community work on the new estate. Another source of support for Sue is the overseeing group representing the denominations that are resourcing her work. “There is no expectation of a particular outcome” says Sue. “The support group ‘get it’ – my job here is to build community and see what happens, not to develop a church plant or any other particular model. Eventually we may see a missional community grow here – but there is no agenda and no pressure.” This imagination, openness and faith that Sue will support what happens organically as the community forms feels like a real gift – to both Sue and to the people who are moving onto the estate.

“I can’t wait to see what takes root as people move in”, Sue says. “I know from experience there will be hard times, boring times, lessons to learn – but this is it at last!” Sue anticipates that her early work will be to identify community gatekeepers – those who just seem to build community around them without trying – and to facilitate what grows. “It’s about building relationships, listening and going with what works.” It’s a threshold moment for Sue and the people currently packing to move to Lubbesthorpe, and we are inspired by the openness to allowing the opportunity to take the shape and vision of those who find a home there. Trusting in the imagination of a Creator who can think way outside the new-build and discerning ways to be involved in the new work in that place – well, that sounds ground breaking to us.

take the next step