“We have missional DNA,” reflects Andrew Vertigan (above)  on the Salvation Army’s FX work, “our roots are in leaving the mainstream and engaging with people on the edge. So our involvement in FX over the past three years has returned the Salvation Army (SA) to the work it was originally called to do.” Andrew, along with his wife Andrea (photo below) with whom he shares his FX role, took up the task of enabling and supporting Salvation Army pioneers when the FX-SA partnership began in 2014. “Prior to the partnership SA pioneering was really only in the hands of a few church planters,” Andrew shared. “Since then we have focussed on being more active, and more strategic in our missional change.”

The last three years have certainly been both active and fruitful times, with 27 new Fresh Expressions established since 2015 and many pioneering leaders identified and trained. Next February’s annual SA-FX gathering will see 170 people already involved in or interested in pioneering work join for a time of resourcing and learning from one another, whilst regional events provide conversational spaces for connection and networks to grow. The benefit of FX involvement is clear – providing a clear framework and rationale for SA pioneering work – but, as Andrew points out, there is a mutual benefit when organisations enter into partnership and learn from one another: “There are similarities between the SA and FX movement, with both sharing a background of moving from mainstream models of church to exploring the margins. We believe that we offer the FX movement the benefit of our own background and experience – challenging FX to think differently about church, and learning from each other.”

This mutuality and connectedness is one area which Andrew reflects on as a highlight of his own engagement with the SA-FX partnership. “We are stronger together,” he offers, explaining how ecumenism offers opportunities for interactions which can inspire and open new spaces. “Alongside the joy of seeing communities change and people come to faith, seeing how leaders from different backgrounds and traditions work and learn together is great.” Of course, alongside the highlights there are also challenges – and all involved in FX may well relate to Andrew and Andrea’s experiences of “internal battles” within the organisation as edges are pushed and norms are challenged. “These feel like normal birth-pains of change,” Andrew shared, “but it’s not easy, and struggles within the organisation make us very aware of how long the journey to change can take.” 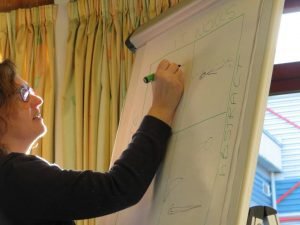 Despite the challenges, key work has been done over the past three years which will ensure that the SA-FX partnership is set in good stead for the future – and there are many examples nationally of SA-FXs which are engaging with people in new ways. From new models of church for incoming Roma migrants in Kent – “messy, chaotic, intergenerational, and often people’s first ever experience of church” – to coffee shops established by churches to engage with people in areas of economic deprivation in London, Andrew speaks of SA-FXs across the country which are offering new models of church in culturally relevant ways for their context. One rural expression is perhaps particularly contextually embedded – developing equine ministry amongst people with disabilities in the Forest of Dean!

Within all the new initiatives, gatherings and developments however, Andrew and Andrea’s overall goal remains constant: “We want to see pioneering models of ministry become the norm, not the exception, across the whole Salvation Army,” Andrew says. “We would like to see Fresh Expressions established and flourishing across all 22 divisions, and whilst this will have big implications for training and resourcing – we are ready to help steer that course.” Andrew and Andrea are currently mentoring advocates who will in turn roll-out training nationally for those involved in SA ministry who want to connect with and develop FX in their context, but also see their role as long-term and are committed to developing the SA-FX partnership: “We’ve come from a context of 23 years of ministry in one church,” Andrew shared, “we’re not afraid of the long-haul!”

For more information about Salvation Army Fresh Expressions, and how to get involved or join one of the regional or national gatherings, head over to http://www.enablingmission.org.uk

Telling Your Story, Telling Mine