Why do Fresh Expressions Matter? 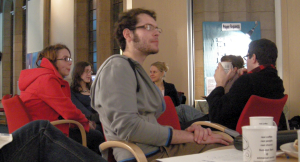 Fresh expressions are part of God's call to mission

They reflect the mission heart of God, they are a vehicle for proclaiming salvation and they are a means of making God's kingdom more real in today's world.

Fresh expressions reach out to a post-modern society

Lots of changes have created a new cultural mood, to which fresh expressions try to respond. Among these changes:

Comment
While networks are more significant than neighbourhoods for many people, in poor urban and rural areas and in many ethnic communities, neighbourhood is still primary. We need to plant fresh expressions into neighbourhoods as well as networks if we are not to prioritise the affluent and mobile sectors of society.
Stuart Murray Williams, Urban Expression

In Britain, despite declining church attendance, interest in spirituality is widespread. In 2000, the Soul of Britain survey found that 76% of the population claimed to have had a spiritual experience, such as answered prayer or a strong sense of God's presence. The figure was almost 60% higher than just over ten years before.

It is often said that people are interested in spirituality but not church. Fresh expressions have the potential to create a less 'churchy' environment in which people can explore their spiritual yearnings.

Fresh expressions respond to the decline of Christendom

Christendom, the time when church was dominant in society, is disappearing fast. Church attendance has been falling for many years. In 1979, 11.7% of the population was in church on Sunday; in 2005, the proportion was 6.3%. On current trends, the figure will be 4.7% in 2015. As church shrinks, it has become less significant in society. Christians are wondering how church might reconnect with people. Fresh expressions are part of this re-thinking process.

It is often easier to plant a different congregation alongside an existing one than to ask churchgoers to change radically how they worship in the hope of attracting newcomers. Instead of inviting people on a church's fringe to come to Sunday worship, which can feel culturally alien, church can grow within a luncheon club – for instance – in a style better suited to that particular group. Multiplying congregations has proved a more effective way of growing church than trying to add more people to an existing congregation.